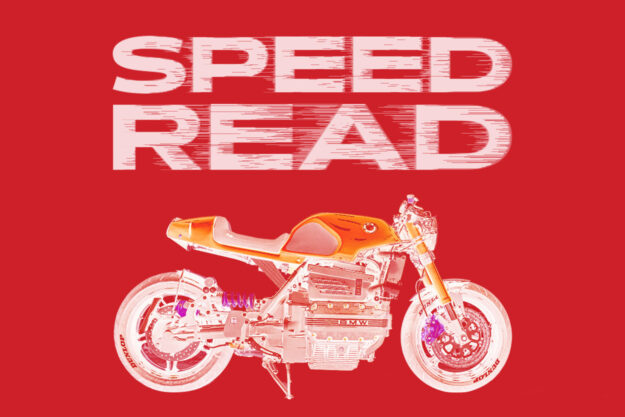 We kick this weekend’s edition of Speed Read off with two very different BMW K100 customs. Then we bring you a Yamaha Virago, a 250 cc BMX-Cub hybrid, and the world’s first flying motorcycle. 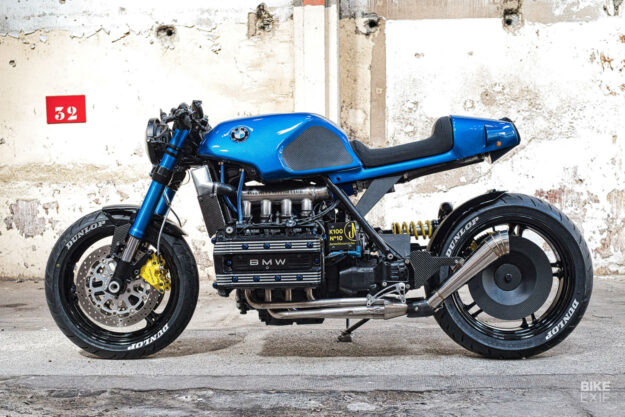 BMW K100 by Jerem Motorcycles Jérémie Duchampt has a knack for building svelte café racers out of bikes with massive power plants. This time he’s worked his magic on one of the chunkiest motors out: the BMW K100.

There’s a sense of mechanical aggression here, thanks to Jérémie’s choice of bodywork. The stock fuel tank is still in play, but it’s been subtly repositioned. Out back is a custom made tail section, complete with a pair of air scoops that play into the bike’s nickname, ‘Top Gun.’ 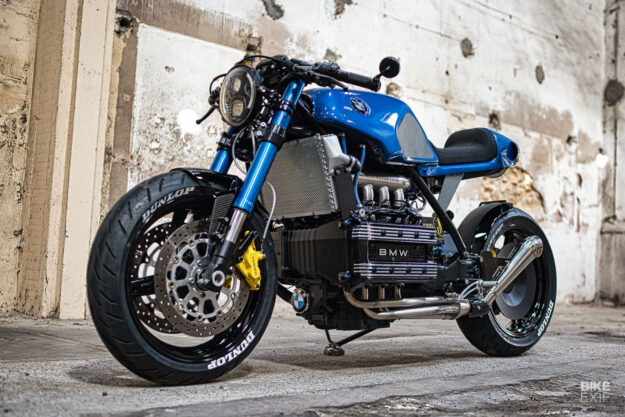 Those scoops aren’t just decorative either. The air filter is actually housed inside the tail bump, with a bespoke stainless steel manifold to control airflow.

Jérémie fabricated a new subframe for the BMW too, and propped the rear up on a Yamaha R1 shock with custom-made linkages. A set of Suzuki TL1000S forks and brakes do duty up front, along with a modified Triumph fender. The wheels come from a Suzuki GSX-R (front) and BMW K1200GT (back). 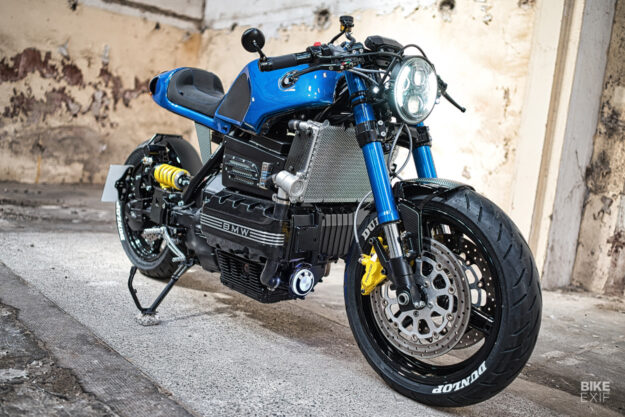 The bike’s been rewired, and now sports a keyless ignition and a full complement of LED lighting. Jérémie deleted the stock ABS system too, and repackaged all the electronic bits in a hand-made fiberglass box under the tank.

The cockpit features new clip-ons, grips and levers, plus an aftermarket digital speedo. Finishing touches include an inner fender at the back, a swingarm-mounted plate bracket and a four-into-one exhaust system. Jérémie relocated the side stand to the right side of the bike too (if you’ve every owned a K-series BMW, you’ll know why). 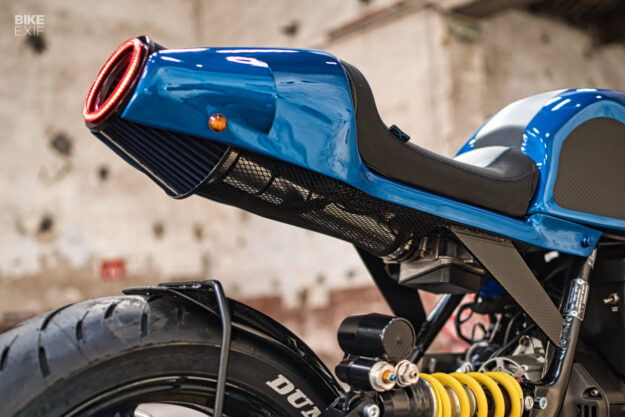 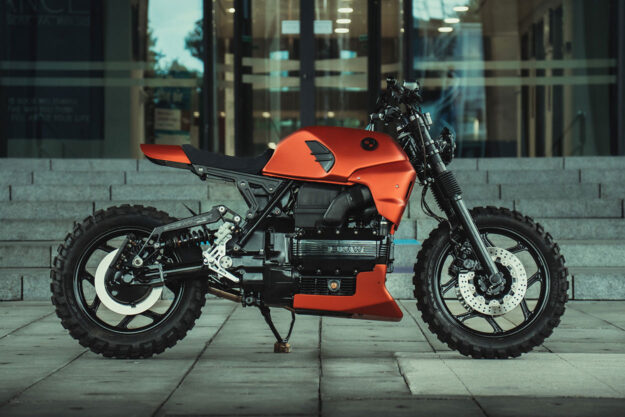 BMW K100 by Moto Rebuild If café racers don’t butter your toast, how about a scrambler-flavored BMW K100 instead? Resplendent in a matte burnt orange metallic paint job, this perky K comes from Maarten Bressers, who runs the Moto Rebuild workshop together with his father. They built it much earlier in the year, but it’s just gone up for sale. 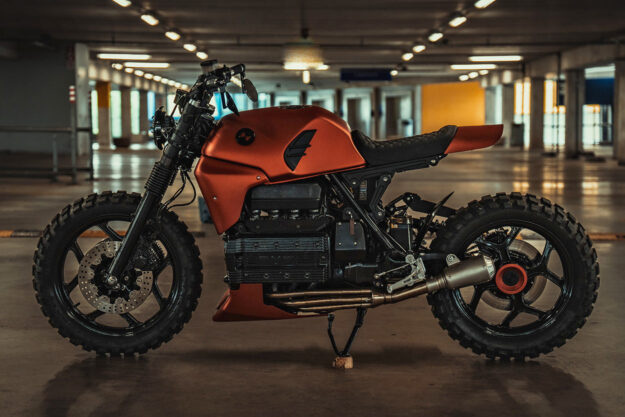 The guys originally set out to create something slick and balanced, without ditching the K’s angular fuel tank. It now wears new side panels, a matching belly pan, and a slim tail section that sits on a custom subframe. The seat came from Cafe4Racer, with the cover handled by Miller Kustom Upholstery.

Cafe4Racer also supplied the unique rear suspension system, which is equipped with a YSS shock. The dual-sport tires are Michelen Anakees. 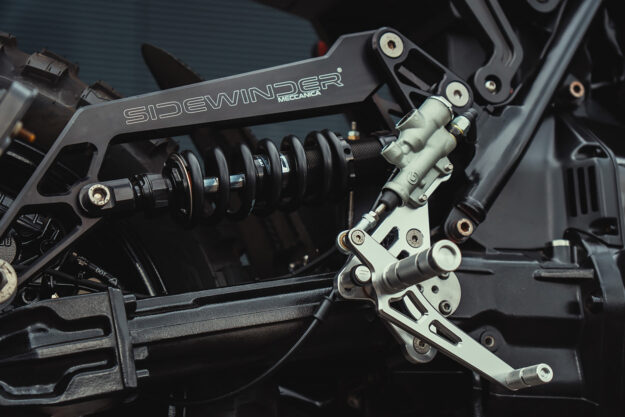 Most of the bike is blacked out, but close inspection will reveal a number of 3D-printed badges and covers. The lack of graphics is refreshing, and the 3D BMW roundels add a particularly nice touch. 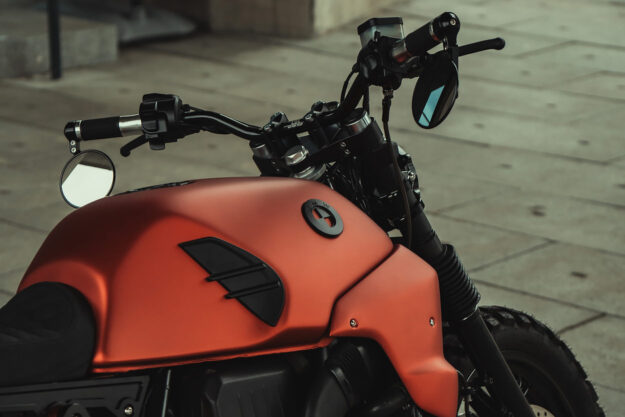 We’re not sure we’d run this K in the dirt, but we’d happily tear up the streets on it. If you’re into it, you can always holler at Maarten and make him an offer. [More] 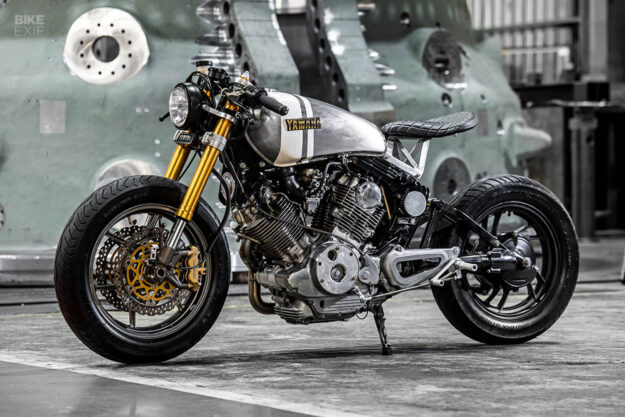 Yamaha XV750 Virago by Pinguin Customs If there’s one bike that’s harder to beautify than a K-series BMW, it’s the Yamaha Virago. But Andreas Tauschek over at Pinguin Customs has done a stellar job with this 1981 XV750. 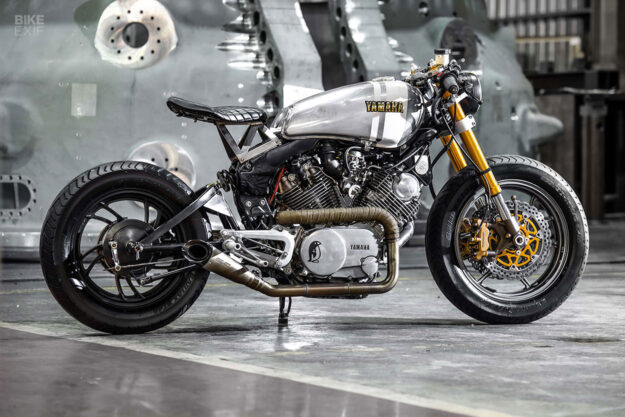 He also grafted on a complete Kawasaki Ninja ZX-6R front end. And we do mean complete—the Kawasaki loaned its forks, front wheel and twin brakes, top yoke, clip-ons and even its switchgear. The cockpit’s finished off with new grips and a tidy Koso speedo.

Out back, Andreas ditched the Virago’s subframe in favor of a custom seat bracket. Perched on top is a Biltwell Inc. solo seat, with a set of Tarozzi rear-sets completing the rider triangle. The bike’s been rewired too, and now runs a Shin Yo LED headlight and Highsider taillights. 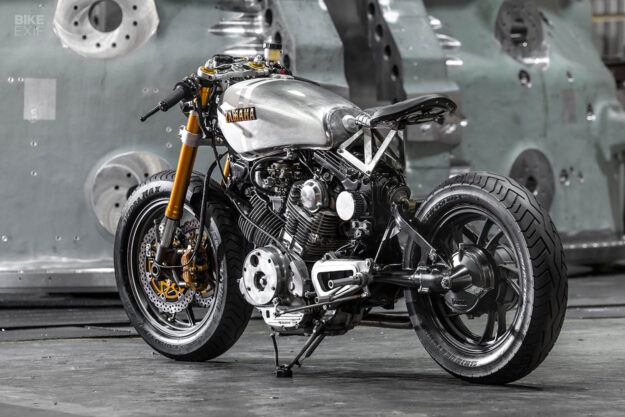 Lower down you’ll find a two-into-one exhaust system, with an SC Project muffler, and just a hint of neatly wound pipe wrap. A ‘Pinguin’ logo on the engine casing adds a cute touch to this otherwise mean machine. [Pinguin Customs] 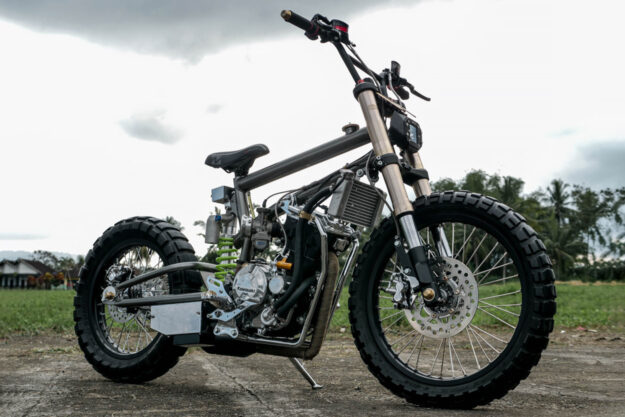 Kawasaki Ninja 250-powered BMX Cub by Enggal Modified If you’ve never seen a ‘BMX Cub’ before, here’s a crash course: they’re basically BMX-style bikes built with parts from Honda Cubs (or Cub clones). Indonesia’s Enggal Modified has built a ton of them, but their latest one is a little wackier than most.

Most BMX Cubs have engines that are 125 cc or smaller—but this one’s running the 250 cc liquid-cooled four-stroke mill from a Kawasaki Ninja 250SL, which is good for around 28 hp. And if that doesn’t sound like much, we’d like to remind you just how spindly this custom scoot is. 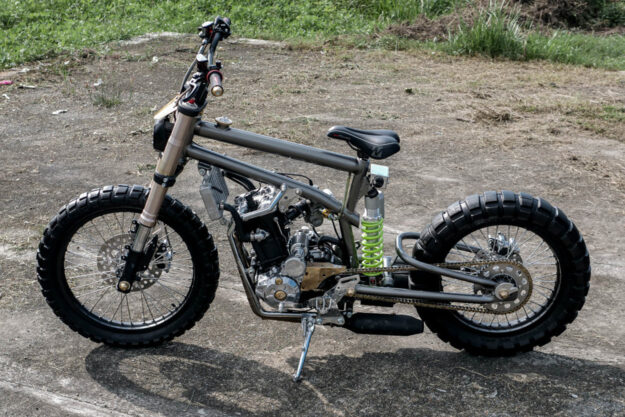 The Ninja engine sits in a custom-made frame, complete with a custom swingarm and a motocross shock. Upside-down forks from a Suzuki GSX-R do duty up front, and the bike rolls on 19F/17R wheels with Shinko rubber.

BMX-style handlebars are matched to an actual BMX seat. As sketchy as it looks, it’s worth noting that this maniacal moped also has disc brakes at both ends. 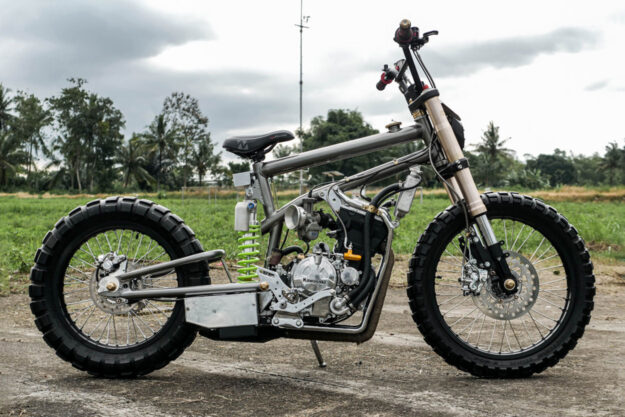 It’s the first time Enggal has built a BMX Cub with a 250 cc motor, but we’re betting it isn’t the last. As soon as the shop posted the complete build to their Instagram account, it was sold… so there’s clearly a market for these. [More] 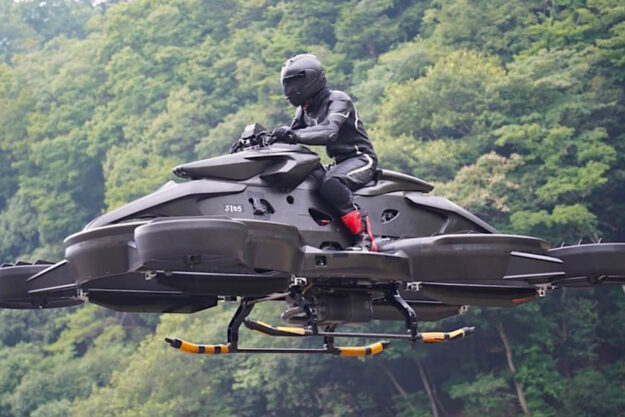 Aerwins XTURISMO hover-bike debuts The future is here: Aerwins has just demoed their XTURISMO hover-bike at the Detroit Auto Show (you can watch the video here). So if you’re a sci-fi nut with an inordinate amount of money burning a hole in your pocket, get ready to place your order.

Specific details on the XTURISMO are slim, but here’s what we do know: it uses six fans to take off and fly, it has a 40 minute flying time, and the claimed top speed is 62 mph. Aerwins lists its weight as 661 lbs—but its maximum payload as just 220 lbs, which rules this writer out. The engine is described as a “gas-electric hybrid powertrain,” but that’s all that’s been said so far. 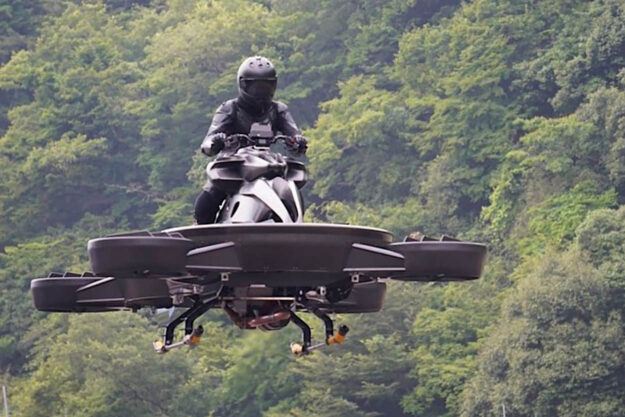 The company’s plan is to sell the XTURISMO in Japan initially. There, the law doesn’t actually classify it as an aircraft—so you don’t need a special license to fly it. They’ll likely expand their market to the US next year, once they manage to navigate local regulations.

The current model is expected to cost $777,000 when it releases (yikes), with a smaller model planned for the future expecting to cost closer to $50,000.

Is the idea of a hover-bike completely ridiculous and not at all practical? Definitely. Is there a better way to get around though? Heck no. [Source]