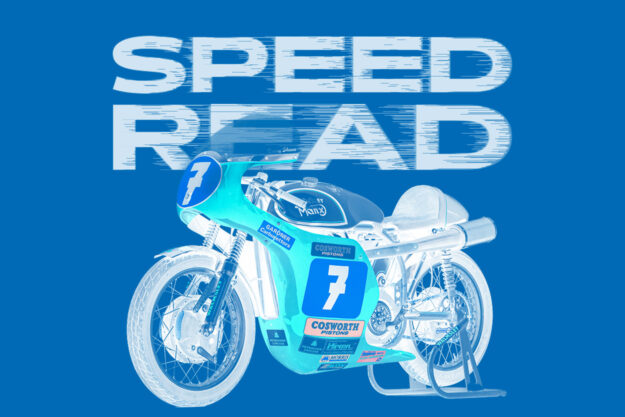 One of the last bikes Barry Sheene ever raced is about to be auctioned off by Bonhams. Plus a look at one of the stars of the recent Glemseck 101 race fest, a Yamaha SR500 that’s still in the crate, and a Honda VFR inspired by Japanese anime. 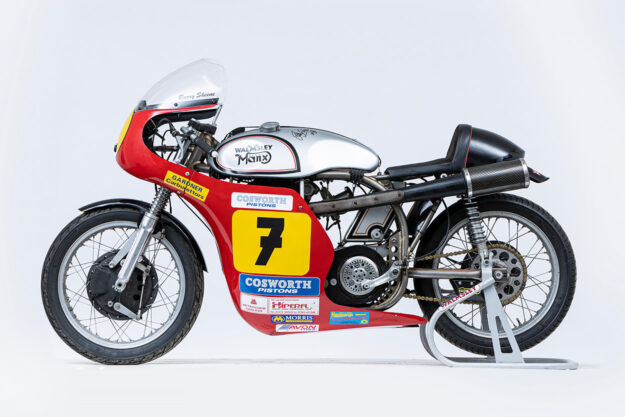 Ex-Barry Sheene Manx Norton 500 If you’ve ever wanted to own a piece of motorcycling history, this is your chance. This Manx Norton 500 race bike was built by world-renowned Manx expert Fred Walmsley. If that’s not enough to convince you, it’s the last bike that Barry Sheene piloted to victory in 2002, before his death in 2003.

Sheene was crowned World Champion in 1976 and 1977, before retiring in 1984. The bike crashes he was involved in over the years led to him developing injury-induced arthritis. To help with this, he moved to Queensland, Australia, where the climate was much more conducive to his comfort. 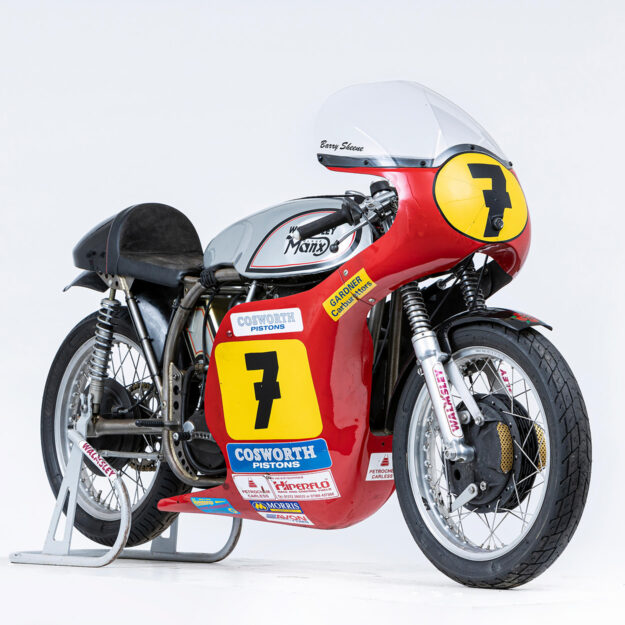 In the late 1990s, Sheene became involved in historic motorcycle racing, which is how he met Fred Walmsley. Barry was riding a non-Walmsley Manx at the Goodwood Revival in 1999 when he had a rather large mechanical failure. Fred was able to fix the bike—and from then on, Sheene would only ride a bike if it was Fred who prepared it for him.

Fred was with his rider John Cronshaw in the Czech Republic in 2002, when he got the call for what would turn out to be Sheene’s last hurrah. Barry had been invited back to Goodwood and needed a bike. 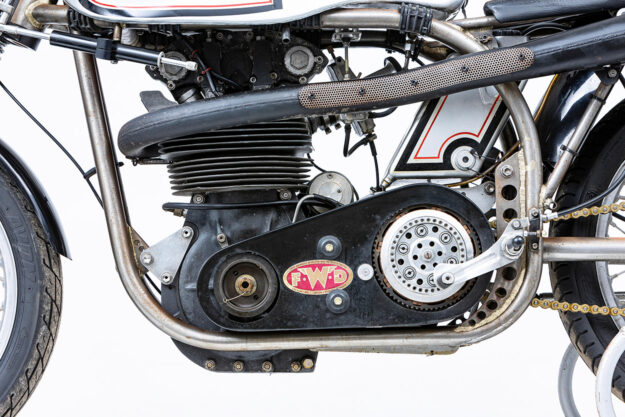 Jumping on a plane that very night, Fred was able to get a Manx prepared just in time for the Goodwood Revival. The FW02 engine had been raced by John Cronshaw only a short time beforehand, so Fred decided to run a different engine for the sake of reliability.

Now reunited with its original engine, the FW02 is being offered for sale after being owned by the same family since 2003. The current price guide is £55,000 to £75,000, so it’s sadly a little out of my price range.

Whether it’s inside or outside your own budget, I recommend you check out the Bonhams listing. Gosh, it’s pretty. [More] 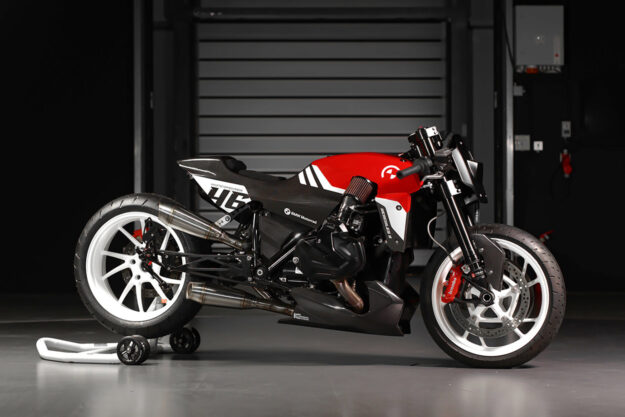 BMW R1250RS by Kraftstoffschmiede Slammed suspension, low clip-on bars and foot pegs way out back, behind the rider. This can only be a Sultans of Sprint race machine.

The European custom motorcycle drag racing series has taken a break over the last few years, but it’s now back in full swing. Philipp Ludwig of Kraftstoffschmiede knows that the Sultans of Sprint eighth-mile drag race is always a highlight. Having won twice before, he was looking for that third trophy—so he teamed up with Kris Szews of Man and the Machines, and BMW themselves, to build this sprint racing bike. 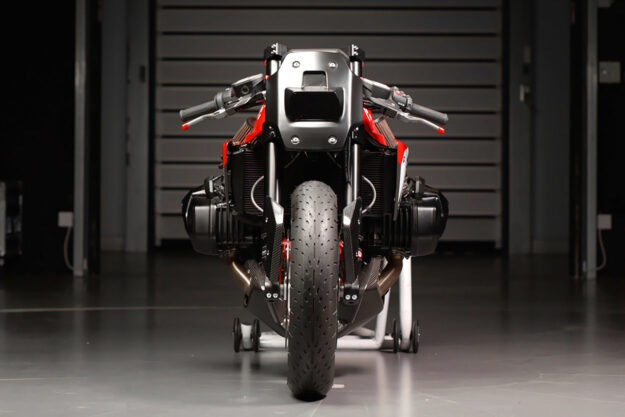 Named ‘Hercules II,’ this BMW R1250RS is an evolution of Kraftstoffschmiede’s previous R1250RS-based race bike, ‘Achilles.’ It features a monocoque body, modeled in 3D and made out of carbon fiber, before being draped artfully over the naked frame. Lightness and power are the names of the game—and on the former, they delivered in spades. 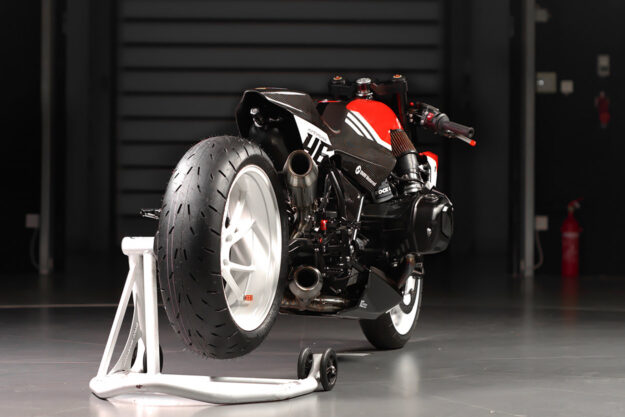 With 136 hp from the factory, the R1250 boxer engine is no slouch. But you have to be a cut above the rest for the Sultans of Spring, so ‘factory’ wasn’t going to cut it. Kraftstoffschmiede bolted on a big ol’ tank of NOS; with the nitrous flow set at 80% and a pair of huge K&N air filters, the 1250 now produces 165 hp and 200 Nm at the back wheel.

Other upgrades include a Hattech exhaust, Wilbers suspension and a carbon fiber nacelle from Rennstall Moto (which Philipp co-owns) to replace the headlight.

For the final sprint in the Rocket Race category at the recent Glemseck 101 event, Philipp was on the grid alongside Stefan from Radical Guzzi. Hercules II was unstoppable, putting Philipp on the top step of the podium once again. [More] 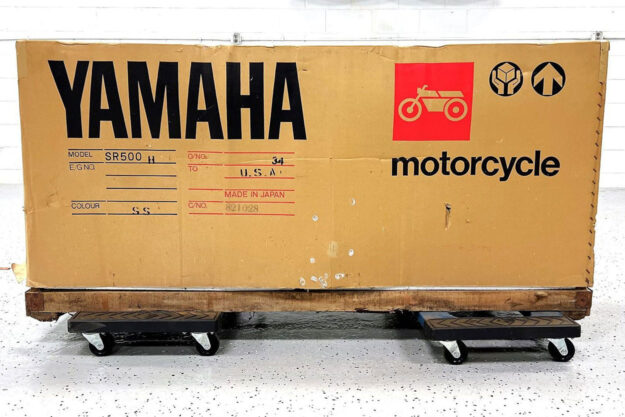 Factory-crated Yamaha SR500 Another week, another decades-old motorcycle still in its factory crate. When will this madness end? Won’t someone think of the children?

Well, this bike was all about one person’s child. Back in 1981, a gentleman in Michigan bought two, brand new Yamaha SR500s—one for himself and the other for his son. The plan was that when the young lad got into motorcycles, they would assemble the bikes together.

The gentleman had them delivered in their crates, and that is where they sat for the next 41 years. Suffice to say, the son’s love for motorcycles never developed. Now the original owner has decided to part with this extremely collectable machine.

Sure, the engine gaskets and seals probably need a refresh, but after the bike is assembled, it will run like a top and have zero on the clock. The Yamaha SR lineup is notoriously hard to kill, being derived from the Paris-Dakar winning XT500 models. 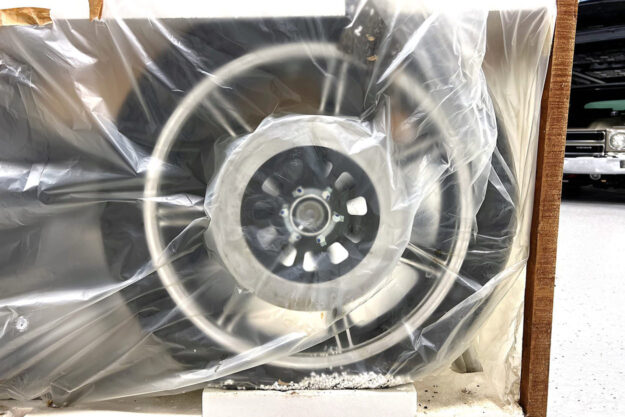 The big single is fantastically simple: an air-cooled 500cc single cylinder, single overhead cam engine, mated to a five-speed transmission. It’s got one inlet valve, one exhaust valve and one carburetor. (I think the only thing it has more than one of, is turn signals.)

If you’re in the market for a brand new motorcycle, but will only settle for one built in the 80s, check out the ad on Bring A Trailer. [More] 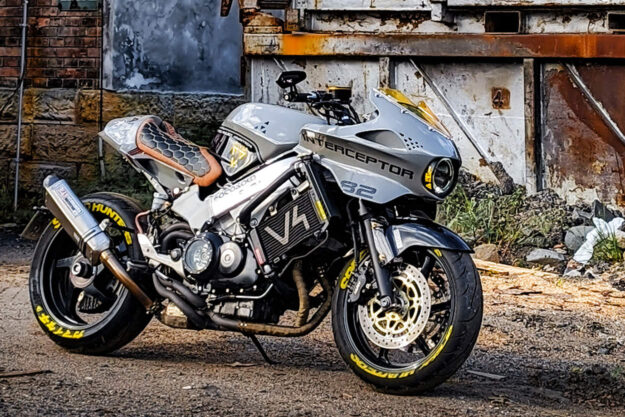 Honda VFR800 by Hrbek Design From the smooth, classic lines of a vintage race bike to this—an angular, futuristic Honda VFR800 inspired by the cult classic film, Akira. It was built by a guy named Jan Hrbek, and if you can’t already tell, he’s a 3D graphic designer.

Finding the 782cc Honda V-four to his liking, Jan set about making it a little more distinguishable among the bike night crowd. Working out of his small workshop at home, he did everything (apart from the paint and some minor fabrication) on the bike himself. 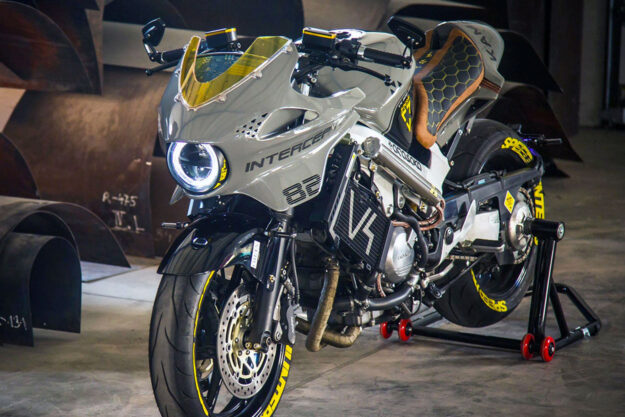 As a 3D designer, Jan has a great interest in rapid prototyping and 3D printing in nylon-carbon. These are the methods he used to create what is possibly the best front fairing I’ve ever seen. From the round LED headlight to the winglets and the flying buttresses, it’s so perfect you’d think that Honda themselves made it.

The rear end got the same treatment as the front, with the whole thing being 3D printed before being finished by hand. There is even an LED brake light nestled in there, sitting inside a 3D-printed housing.

Another notable feature is the clear clutch cover on the right side engine case. It was all done by Jan, with a helping hand from a CNC water jet cutter, a lathe and a lot of precision.

To spice up the left side of the bike, a stainless steel radiator overflow tank was made. With the stock fairing removed, the radiators themselves were left uncovered—so Jan painted them black, and fitted a modified set of MT-09 protectors. 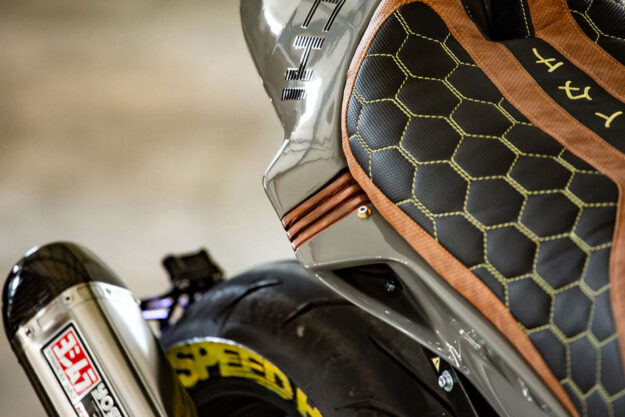 Emblazoned with yellow and black anime-inspired details over a Nardo Grey paint, Jan’s VFR will certainly stand out in a crowd. I can’t wait to see what wild creation he comes up with next. [More] 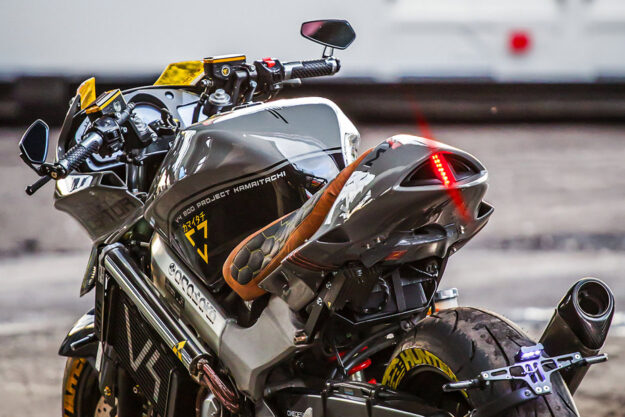