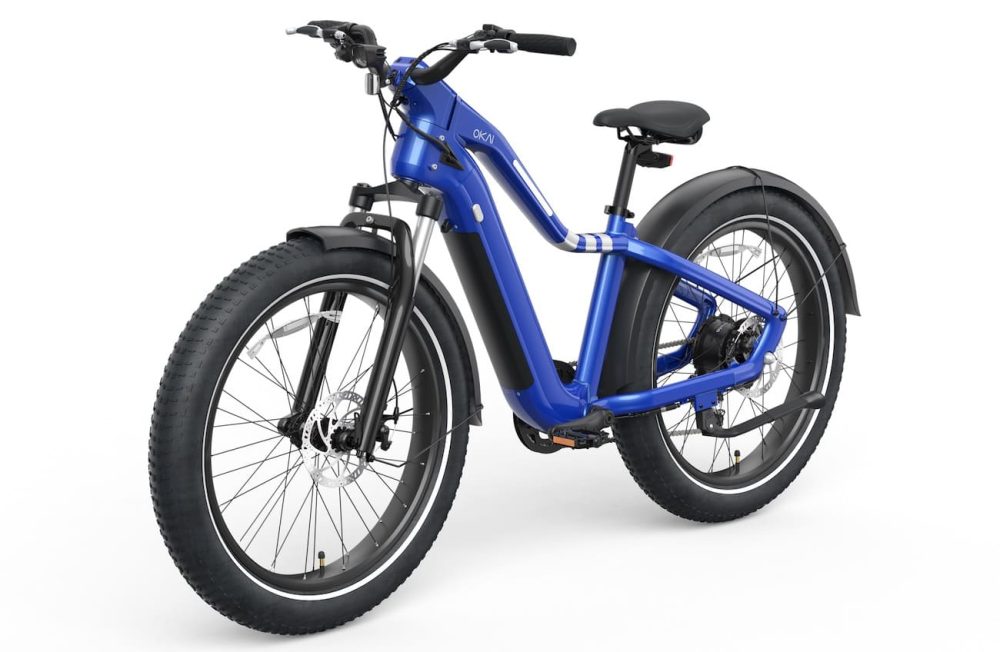 The OKAI Ranger is a fat tire electric bike with a sporty hardtail frame and front suspension fork. That puts it in something of the adventure e-bike class, likely competing head to head with establish e-bikes like the RadRover 6 or Aventon Aventure.

Priced at $1,999 (though with a $100 sale currently still going on), the bike is a bit pricier than some others in this class.

A 750W nominal and 1,000W peak-rated rear hub motor should give the two-wheeler plenty of acceleration, though the top speed is limited to just 20 mph (32 km/h). That should keep the Ranger classified as a Class 2 e-bike in the US, as opposed to Class 3 e-bikes that can reach higher speeds of up to 28 mph (45 km/h).

The bike’s mechanical disc brakes aren’t quite as powerful as the hydraulic disc brakes that are quickly becoming standard on these types of e-bikes, but should be plenty for stops from 20 mph. Included front, rear, and side LED lights plus a fender set will also keep the bike effective at urban commuting roles when riders aren’t getting down and dirty on the trails.

More than just a collection of mechanical components and e-bike drive parts, the OKAI Ranger sports some interesting tech housed in its stem. Instead of typical bicycle stem, the area that connects the handlebars to the rest of the bike, the Ranger has a beefier stem that houses a built-in LCD touchscreen display.

There’s also a wired remote on the bars with physical buttons, just in case riders find it tricky to hit a moving target on the screen with their finger while riding at full speed.

The color screen offers the usual ride data such as speed, battery charge, distance covered, power usage, etc. A range calculator also helps riders know how much distance they have left based on their current riding style.

OKAI also has a fairly extensive app to give riders even more data and increased control over the bike’s parameters.

The OKAI Ranger marks another new expansion for the electric mobility company. For years, OKAI has been the silent but ubiquitous producer of electric scooters and e-bikes for some of the largest shared mobility companies in the world. If you’ve ridden a shared e-bike or e-scooter recently, there’s a pretty good chance that OKAI built it before it was rebranded with the bright colors and catchy label of one of dozens of shared mobility operators.

But the OKAI Ranger ups the ante with an even larger and more powerful e-bike designed for tackling serious off-road conditions.