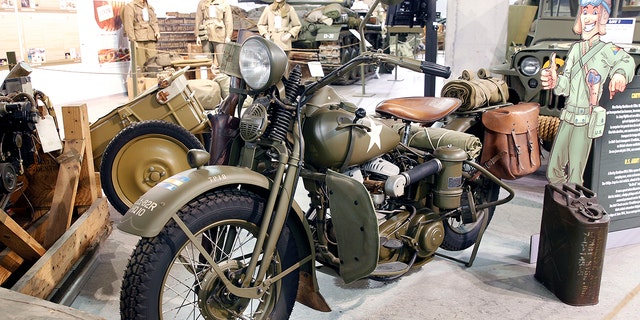 The LiveWire is one of the first battery-powered bikes from a major motorcycle maker and a dramatic departure for Harley-Davidson. Does it have the stuff to electrify the brand? Fox News Autos editor thew a leg over one to find out.

Harley-Davidson has revealed a line of military-themed motorcycles that tip their hats to the brand’s efforts during World War 2.

Harley-Davidson supplied the U.S. Army with thousands of WLA motorcycles during the war and continued to build it through 1952.

It was specially designed with features needed for combat duty in rough terrain, including fenders, heavy duty luggage racks and, in some cases, scabbards large enough for Thompson submachine guns.

The Harley-Davidson WLA is a military-spec motorcycle built during World War 2.
(Chesnot/Getty Images)

Essentially a two-wheel version of the Willys Jeep, the WLA has lived on in pop culture as Captain America’s ride in the Marvel universe.

They don’t get any mechanical upgrades, but feature olive drab paint and star graphics with H-D stencils on the tanks. The Tri Glide adds a USA logo on its trunk.

The Tri Glide Ultra G.I. is a three-wheel trike.
(Harley-Davidson)

The brand said the pair “honors Harley-Davidson’s community of riders who have and continue to serve in the U.S. Armed Forces.”

Prices start at $20,799 for the Special G.I. and $38,099 for the Ultra G.I. Both are available now for a limited time and will be followed by additional Enthusiast Collection models with different themes.